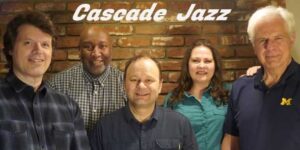 Cascade Jazz performs a unique blend of original, classic and contemporary jazz, as well as shows featuring music and multimedia. The group has been described as “energetic, creative and fun to watch” by local Snoqualmie Valley and Eastside media.

Cascade Jazz has been performing in the Seattle and Eastside area since 2000. The group has appeared in annual community festival concerts such as Issaquah Salmon Days, Snoqualmie Railroad Days, the Festival at Mt. Si, and many others. The ensemble headlined the Mountain Meadows Festival in 2010, and was selected to perform at the 35 th Anniversary Celebration of the Total Experience Gospel Choir in Seattle. They were a featured act at both the North Bend and Snoqualmie Centennial celebrations. They are the stage band for the Alchemy Tap Project in their shows at the Cornish Playhouse in Seattle.

Cascade Jazz has been a regular performer at Boxley’s jazz club, Soulfood Books in Redmond, and was the house band at Valley Center Stage in North Bend for four years. For information about the band and bookings, contact John Chmaj: