The Dianne Trani Trio at Bellevue 1-7-23

The Dianne Trani Trio at Bellevue 1-7-23 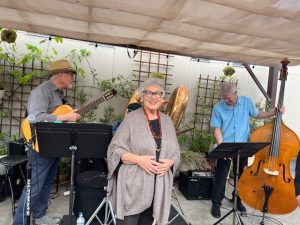 Dianne Trani is a native Seattleite and has performed in the area for many years. Her earliest work as a lead singer started in Pioneer Square in the dance clubs of the 80’s and at Bumbershoot, Seattle Symphony celebrations and in radio theater work with KPLU radio.

Bruce Barnard is originally from Detroit and has a BA from Oakland University where he played and studied under the direction of Marvin Holliday and began an active dance band career. In the mid-2000’s Bruce founded the Seattle Jazz Guitar Society, an ongoing concern with monthly jam sessions and a membership of over 100 musicians.

The Bruce Barnard Trio with Dianne Trani promises a wide ranging entertainment package that covers all types of Pop, Latin and Jazz for your listening pleasure!