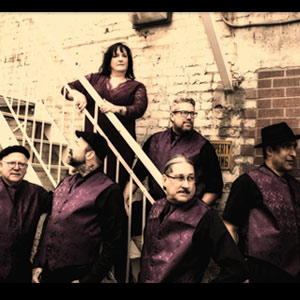 Seattle-based Michele D’Amour and the Love Dealers have been slinging their brand of sexy, sassy blues all along the west coast since 2011. According to Don and Sheryl’s Blues Blog, “Michele is a big-voiced, blues-beltin’ chanteuse, who’s equally comfortable with a torch song as she is with straight blues and even protest songs.” The band draws its repertoire from a mix of well-written originals that sound classic, and carefully chosen covers on which the band puts its own spin. Fans appreciate their lyrical “soulful whimsy” and deep dedication to the groove. Michele D’Amour and the Love Dealers have played more shows than you can shake a stick at, and they have been invited back to numerous festivals and venues due to their ability to put on a show that entices people get up to dance and sometimes even take part in the show as impromptu backup singers.