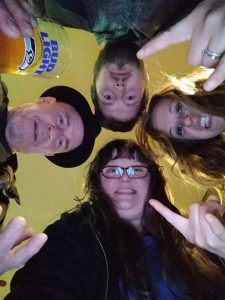 Dawnzella has been singing for as long as she can remember. She wrote and performed musical parodies in “Laughingstock Comedy Troupe”, and spent a couple of years on stage doing stand-up. She joined the karaoke craze in the 90’s where she met her husband, “Mikey G”. Her raw, honest vocals found a home in the blues, adding a touch of her rocker soul to each tune.

Lea began playing the drums as a teenager and has played professionally for a number of years. She met Daniel at Gonzaga University while pursuing a degree in music. She can play any style of music, but especially enjoys laying down a sick beat for originals in her band Auditorius, or driving the groove train in The Spin-offs.

Daniels first instrument was a drum set. He soon found the guitar and has played, a lot, since.  He attended Gonzaga University and earned a degree in music, and met Lea. He has played and written music in many bands, including his current band Auditorius, and enjoys adding his killer rock guitar style to blues, funk, and soul tunes in the Spin-offs.

Enjoying any type of music has always been one of Mikey’s favorite things in life.  His first instrument was a drum set that his parents bought for him at age 9, what were they thinking? Soon after, he began to learn guitar, by ear.  At the turn of the century, he was persuaded to switch to bass guitar. He always plays with a passion as if it’s the meaning of life.

The Spin-offs were created from the All-Star Women’s Blues Jam at Spinnaker Bay Brewing in Hillman City. Spinnaker Bay Brewing is now NWPeaks Brewing, and the Jam is no more. Lea and Dawnzella had so much fun playing together once a month that they decided to form an all-girl band, but some contents shifted and the guitar and bass players left to pursue other projects. Lea looked at Dawnzella and said, “my husband plays guitar”, and Dawnzella said “my husband plays bass”, and they are both man enough to play in an all-girl band!

We play Blues, Soul, and Funk tunes with a Rock edge to help you shake off the negative.